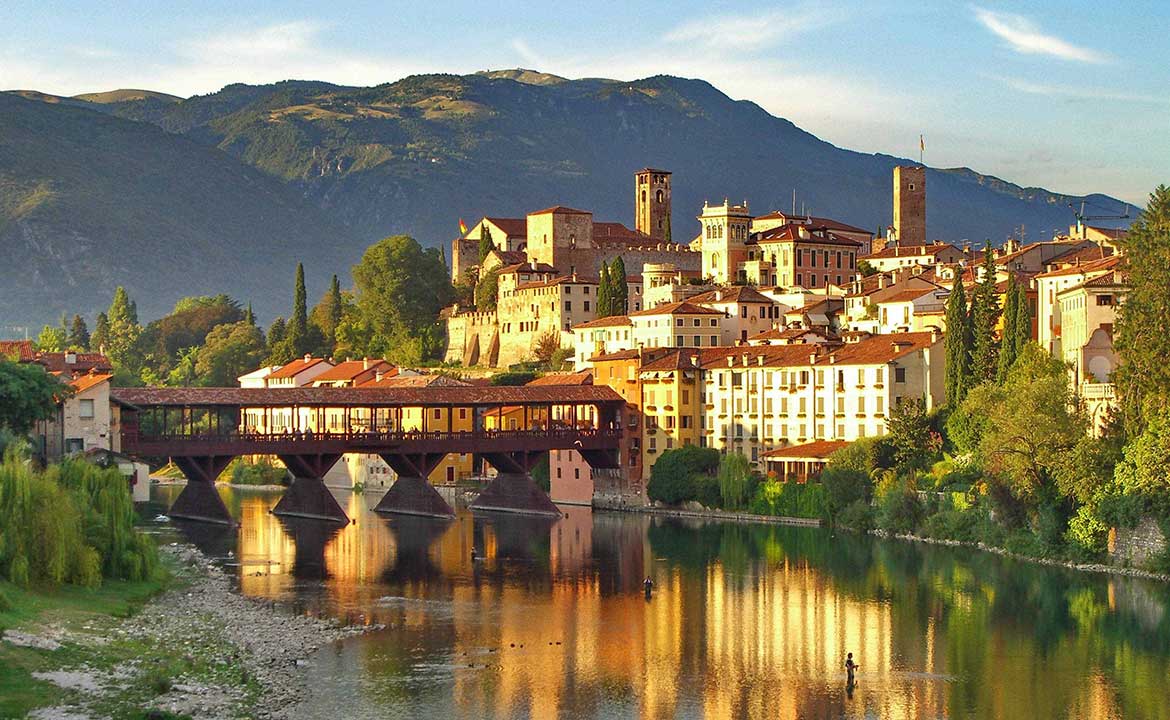 At the crossroad of the provinces of Vicenza, Treviso, Padova, Belluno and Trento, Bassano del Grappa is and antique small city raised on the two banks of the Brenta River, where the Valsugana opens up to the south into the Pianura Veneta. Of Roman origin, it preserves in the center and in the neighborhood, many architectural and artistic testimonies of the past centuries.

It is especially famous is for its wooden bridge, the Ponte Vecchio o degli Alpini, as it has been adopted like an unofficial and sentimental symbol of the mountain troops which fought in this area during the first world war. On the Bridge, there is also a small but interesting museum dedicated to the Alpini, while on the other end of the Bridge you can visit Distilleria Nardini, amongst the most antique in Europe, where you can taste the renowned local grappa or one of the aperitifs based on the house’s spirits. Each plank of Ponte Vecchio is full of history: built in the XIII century, it was destroyed and re-built several times as a consequence of historical or natural events, and to the present design Andrea Palladio contributed as well. Celebrated in popular songs, from its structure, one can enjoy a breathtaking view of the city and on the south and north course of the river, while the exterior walls of the buildings near the bridge, still show the signs of the battle which took place during the Napoleonic Wars.

Not far from here there is the curious mini-museum dedicated to grappa, the local spirit, and to its production.

Bassano boasts also the most antique Museo Civico in the Veneto region. Here are preserved, amongst others, many canvas of Jacopo da Ponte – o Jacopo Bassano – painter native of the city, amongst the most important painters of the Italian sixteenth century, and of his school, in addition to works of Canova and the collection of the Remondini.

The cinta muraria, con il Castello degli Ezzelini is still visible in many points and on some segments, it still can be visited, like the Torre Civica.

Amongst the historical access points to the center, stand out Porta delle Grazie and Porta Dieda, with the large heraldic frescos dating back to the Middle Age.

A visit to the city cannot exclude the Museum of Ceramic in Palazzo Sturm.

Recently opened, Museo Hemingway, dedicated to the presence in the city of the writer in 1918, located in the beautiful rooms of Cà Erizzo, great private abode on the banks of the river.

We have given you just some indications: Bassano and the surroundings are very rich of historical places, artistic and cultural interests. Discover all of them during your vacation at our Bed & Breakfast.