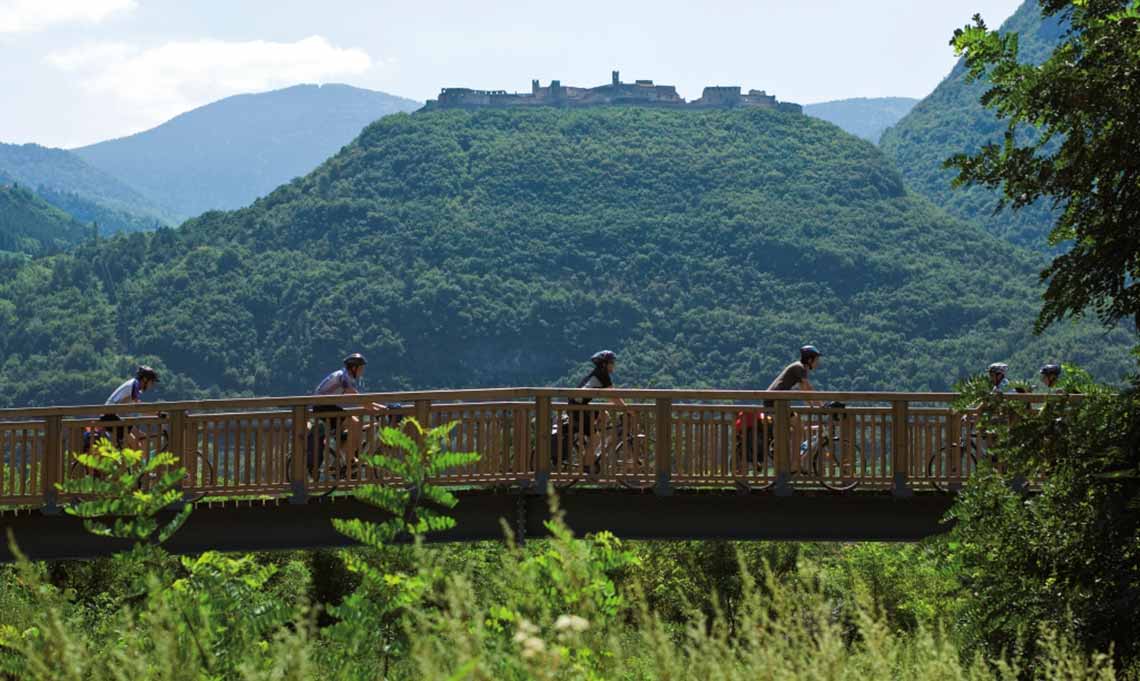 Just outside the center of Bassano, there is Brolo Bassano Golf Club, with driving range, putting green and pitching green plus 3 holes executive course. Additionally, nearby, the enthusiastic can enjoy two among the most prestigious golf courses in Veneto: the 27 holes Asolo Golf Club and the 18 holes Golf Club Asiago.

The Bassano territory is at the center of the so called Percorso Ciclabile del Brenta, (Cyclable Brenta Itinerary), that from lakes of the Trentino region, Levico and Caldonazzo – easily reachable for the cycling tourists from Austria and Germany – crosses the basin of the river and leads you through authentic cyclable tracks, sometimes with mixed traffic, all the way to Padova.

Generally, the hills, the area surrounding the bed of the Brenta river and the elevations of the area, offer uncountable, wonderful and diversified opportunities to practice cycle tourism, mountain bike and downhill.

From the banks of the Brenta –Bassano-Valstagna route– to the wavy hills of Marostica and Mason, to the arduous paths and the mule tracks of the Mount Grappa and Plateau of the Seven Municipalities, the territory is a true paradise for the walkers in any physical shape. A special mention is due to the Alta Via del Tabacco,

the path that overlooks the Brenta canal, amongst forests, views of the valley, bunkers and posts of the First World War and the refuges once used by tobacco’s smugglers.

At 12,5 km from Romano d’Ezzelino, Bed and Breakfast.

Ten minutes from Romano heading North, there is Valstagna, a small Italian capital for kayaking, canoeing and rafting, thanks to the particular conformation of the Brenta river in its territory. Here were born and raised Olympic champions of the various specialties: professionals from all over the world train and compete, but various structures also offered to amateurs and tourists, the possibility of a day or a few hours between the waves and the rapids of the water course. The town is also a renowned destination for its typical architectonic and urbanistic configuration and the traditional cultivated terraces sustained by dry stone walls  (masiere) on the side of the mountains which define the valley.

Climbing rock walls and via ferratas are numerous all along the Brenta Valley, but in particular, very few minutes from the B&B, in Romano d’Ezzelino, we find the cliffs of Valle Santa Felicita, with different paths according to the different grades of difficulties and preparation.

The spurs of Monte Grappa between Romano d’Ezzelino, Borso del Grappa and Crespano, are ideal for practicing free flight, hang-glider or paraglider, thanks to the orographic configuration which protects them from the northern winds. Roads allow you to reach elevated heights of launching in few minutes and the mountain walls overlooking the wide plain rather than narrow mountain valleys. Abundance of upward currents and a microclimate which allows about 300 flyable days a year, make the area a perfect gym for experts and beginners, attended by schools from all over Europe.